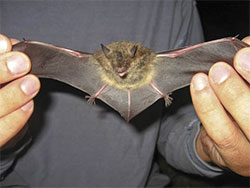 Bats are one of the most misunderstood of all the nuisance animals. Despite their ecological value, they are often needlessly feared by humans. Throughout history, bats have been falsely portrayed in books and movies. They are actually a vital part of the SE Michigan ecosystem. Bats can consume thousands of insects a night, thereby helping to control insect populations that destroy crops and spread disease.

Although bats are rarely harmful to humans, they can be very destructive if they colonize and infest your attic. They can be heard scratching on the ceiling at night as they move under the insulation. Left unchecked, a bat colony can quickly grow to dozens of bats. These bats leave behind droppings called guano that can accumulate in your attic and cause damage to your insulation, odors and possible health hazards.

There are over 900 species of bats worldwide, second only to rodents, and they are the only mammal that can truly fly. The two most common bats in SE Michigan are the Little Brown bat and the Big Brown bat. They are colonial bats that congregate in groups and are mostly active during the summer.

Big Brown Bats are about 4 to 5 inches long with brown to reddish brown fur. While they only weigh about a ½ ounce, they can have a wing span of 10 to 12 inches in length. Big Browns live in colonies of up to a dozen or more bats. Babies are born in late May to early June with females giving birth to one baby. Babies begin to fly by late July to early August. Bat exclusions should not be completed until after the babies begin to fly as to avoid locking them in your attic.

Little Brown Bats are about 3 to 4 inches long with tan to reddish brown fur. They have a wing span of 8 to 10 inches and only weigh about a 3rd of an ounce. Like Big Browns, they live in colonies and females have one baby per litter. Babies are born in late May to early June and begin to fly by late July to early August. Little Browns will sometimes share a roost with Big Browns.

Bats present several unique challenges for proper control. Therefore only trained professionals should attempt to exclude bats from attics. Both species of Michigan bats will hibernate during the winter, although the Big Brown may migrate short distances. It is important not to perform exclusion work at this time as bats will become trapped in the attic when they wake up in the spring. Also, bats have babies in the late spring to early summer. It’s very important not to complete exclusions at this time so you don’t lock the babies in the attic. Check valves and other exclusion devices should not be installed until after the babies have begun to fly. This occurs in late July to early August. Bat exclusions should not be done during June and July.Bats

If you hear scratching noises in your attic, or if you suspect you have a bat problem in your attic, call the experts at Animal Pro for a complete inspection. With over 20 years of experience in bat removal in Brighton and Howell, Michigan, we solve all your bat problems. 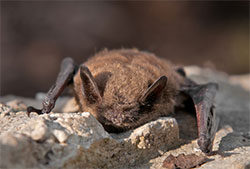 Call (248) 676-8800 for an appointment to get your bat removal in Brighton and Howell, Michigan started or e-mail Animal Pro at "[email protected].